It’s Pride month in Ottawa! Do you know why Ottawa actually celebrates pride in August instead of June? It’s not because Ottawa is always late to the party…it ties to a significant moment in recent 2SLGBTQ+ history in Canada.

Instead of me talking about the 50th anniversary of the We Demand protest, I am doing something a little different with my executive director blog. I am passing the mic to a feminist queer historian– interview style! Consider this my amateur attempt at oral history…

Let me introduce you to my guest Dr. Patrizia Gentile, PhD (she/her). Or, how I call her – Pat.

Pat Gentile is an associate professor at Carleton University. She is an expert on cultural/gender history, history of sexuality, and queer theory just to name a few. She is the co-author of The Canadian War on Queers and editor of We Still Demand! Redefining Resistance in Sex and Gender Struggles. The opportunity to interview her for this two-part blog series, and for her to share her perspective on We Demand 1971, queer resistance and commemoration is an absolute honour.

Debbie: Hi Pat! Here’s my first question: What was We Demand? Can you describe the historical context of the event?

Pat: We Demand was a protest that took place on August 28th, 1971. It was on a rainy, Sunday afternoon. There were about 100 to 200 people who walked holding banners onto Parliament Hill. Toronto Gay Action, one of the first gay liberation groups located in Toronto, organized this protest. What they planned to do on the steps and front door of Parliament Hill was deliver a speech based on 10 summarized demands that were written by the same group and sent to the government earlier on. 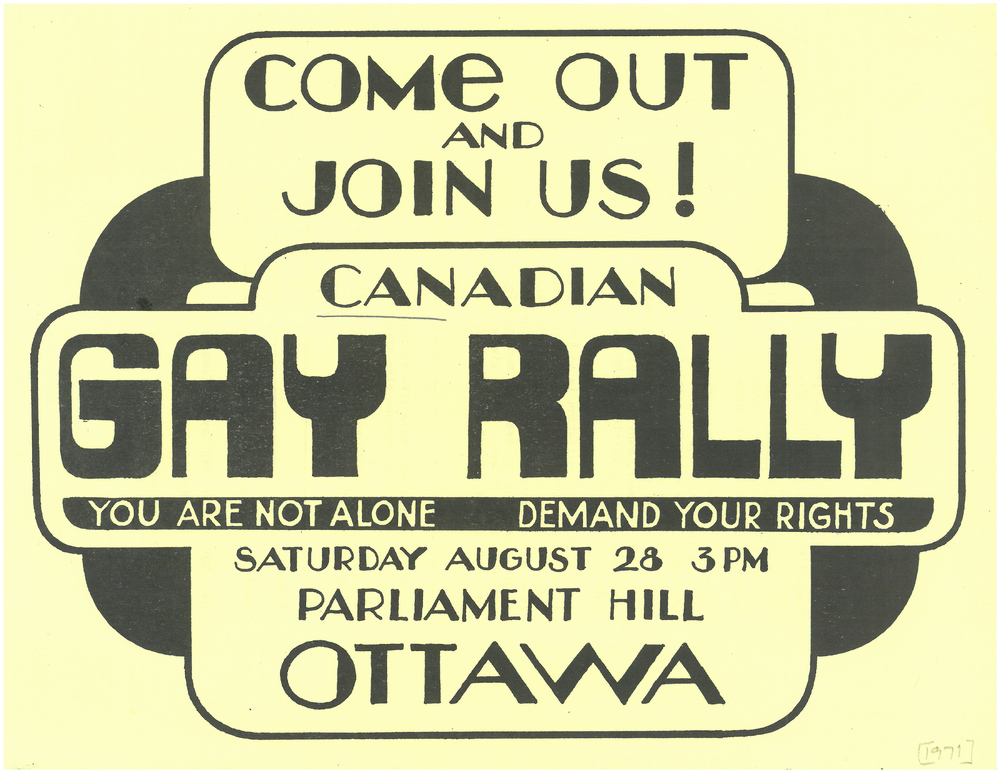 We Demand Original rallying poster for the demonstration ~ Source: The Arquives

That’s one of the parts that most people don’t know about: the demands and the speech that were read on Parliament Hill were a summary of a much larger brief explaining in detail the different legal and social-political policies that the Toronto Gay Action felt were discriminatory towards gays and lesbians (which is historically what they would call themselves at the time).

1971 is an important year because that protest marked the second anniversary of the 1969 Omnibus Bill, which is also called Bill C-150. 1971 is only two years into this very famous bill that was passed by Prime Minister Pierre Elliott Trudeau, who said, “the state has no business in the bedrooms of Canadians”. The other context around the 1971 We Demand protest is the Stonewall Riots that happened a couple of years prior in the US. The liberation movement became a breeding ground for activism and radicalism at this time for gay and lesbian groups across North America.

Debbie: Who were the groups championing the mobilization? Which groups were not included? Why?

Pat: When we’re talking about the gay and lesbian liberation movements, we’re talking about groups like, for example,  The Body Politic collective which is the gay and lesbian newspaper that is active throughout the 1970s and up to 1987 – sort of has this 15-year lifespan. But it’s extremely influential in terms of disseminating information, not just in Canada and the US, but has an international readership. 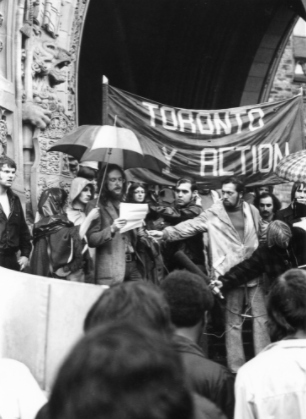 Then we also have the rise of the Gay Alliance groups that also pop up all over the country. In the context of Quebec queer and trans history, there is Le Front de libération homosexual (FLH). And then we have, of course, all the lesbian organizations, like LOOT, and lesbian communes, lesbian separatist groups, and lesbian feminist groups. These groups are all organizing, but these are largely whites, educated, middle-class people who are fighting for visibility based on their identity as queer people, as gays and lesbians.

Moving towards the mid-1970s, these groups are starting to realize that they want to create more legal rights for themselves and begin campaigning for changes on human rights codes. One of the first human rights codes that were changed provincially was in the Quebec setting. That then sort of precipitated the focus on human rights codes and the Bill of Rights, in terms of the larger federal context, to end discrimination based on sexual orientation.

That switch to what’s called “assimilation politics” meant that marginalized communities within gay and lesbian communities were left out. We’re talking about people who identified as non-binary, people who were trans, black, queer and trans communities, queers living in poverty, queer youth, anyone that would not be considered part of this larger respectability politics and legal trajectory towards ending discrimination based on sexual orientation. So, while We Demand 1971 didn’t start that trajectory towards assimilation politics, it’s one of the roots that end up excluding all these other groups that really made the movement, but were not recognized as part of the movement.

What happened in 1971 was radical for the time, but the exclusion of the list of people I named still applies. It doesn’t matter what decade or era we’re in – when you look at this with an intersectional lens in terms of race, gender, and class – the group that is always is excluded is sex workers.

Debbie: In your edited book, We Still Demand (2017), the authors mention new ‘demands’ or issues that have not been addressed, rights not yet given, despite the historic changes of the We Demand era. Can you speak more to this and explain what and why we still demand? Speak from your heart…

Pat: The We Still Demand anthology is problematic in itself, however,  one thing it does well is discussed how the erasure of sex work was palatable throughout the We Demand list of demands, speech and protest. The anthology tries to highlight the importance of sex workers (such as Black trans women in the 50s, 60s, and 70s) in building and establishing the gay and lesbian liberation movement. That allows us to talk about the role of sex workers and queer youth, and how they were really important in building these movements.

I think the anthology was trying to address the gaps around erasure, especially when people try to respond with, “Yeah. But you need to understand the times.” No, they knew about this. We know because the demands even talked about the Immigration Act! But, they didn’t want to get into the nuances of that, because if they did, then they’d have to deal with trans bodies; they’d have to deal with black trans female sex workers; if they did, they’d have to deal with so-called hustlers and queer youth. They didn’t want to do that because they thought it would create a legitimacy issue for them. So, that is what I’m proud of about the We Still Demand anthology. However, there’s not a lot of space in the anthology on the voices of Two-Spirit, for instance.

One article in the anthology that I think is really important is written by Beverly Baines. She does a wonderful ethnography about Blockorama. That to me, Debbie, is really important because one of the biggest controversies that is happening in places like Toronto, that is also the case for Ottawa, Montreal or Vancouver – larger cities in our country – is the anti-Blackness at the heart of the gay and lesbian liberation movement. That was very real in 1969. That was very real in 1971 on those steps of Parliament Hill and is still continuing to this day. Beverly’s article says, “Yeah, we were always here. So, don’t say that we weren’t. When you’ve done that, you’ve purposely erased us and that’s because of the anti-Blackness within the movement.” 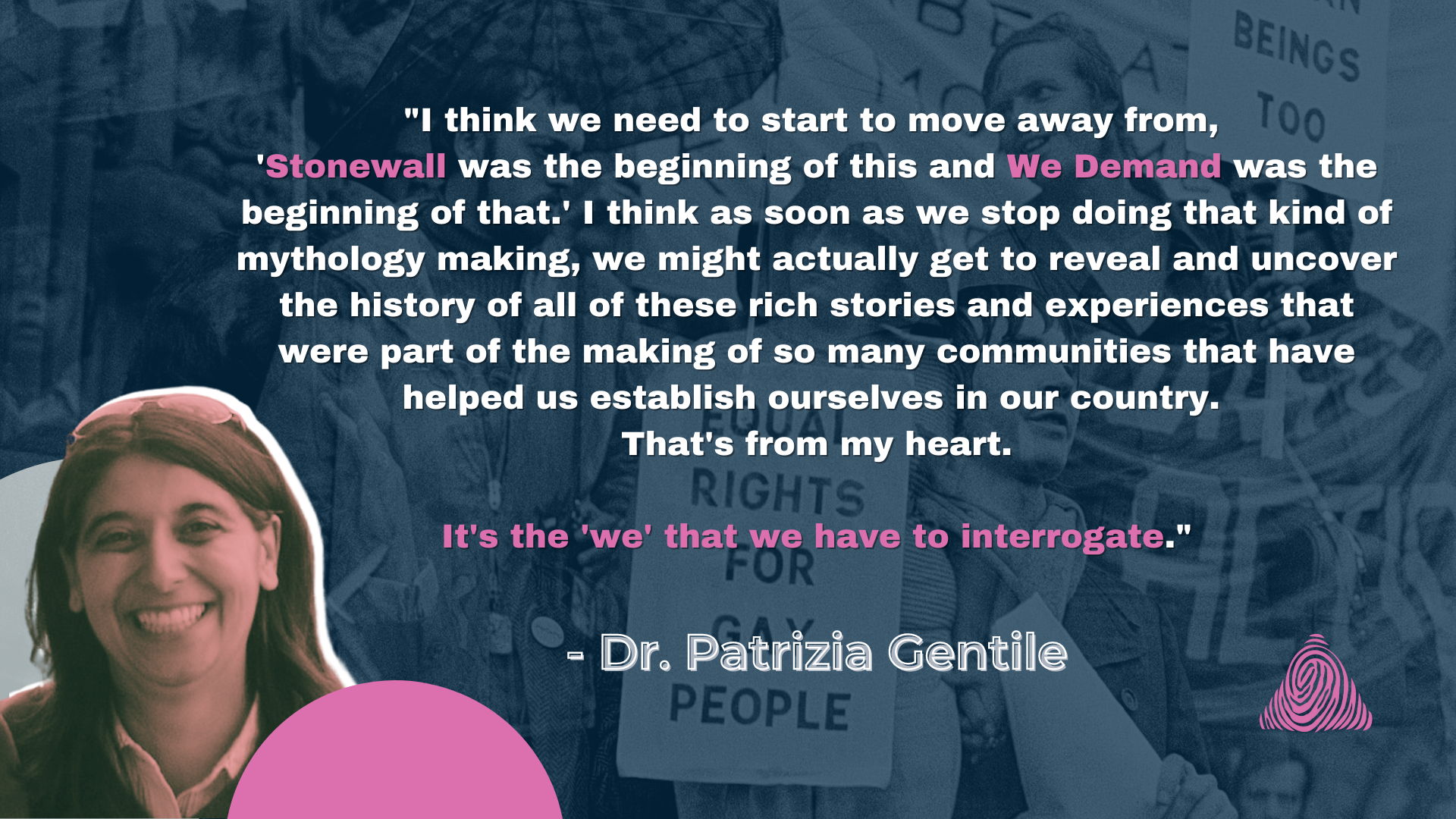 Debbie: Why do you think We Demand lasts in our memory as a significant event in queer Canadian history?

Pat: This is my own internal debate as a queer historian who has a voice in our country: whether it’s in Canada or the US, or in a European context, we want to fight and be critical of creating mythologies, but we also want those mythologies. And I honestly think, Debbie, if you asked us, we would all probably deny it. But I think we really actually have to stop that kind of delusional stuff we’re doing where we believe as academics that we’re just trying to tell the story. No, what we want to do is create a mythology because it creates comfort for us.

But the “we” – that’s the problem around the We Demand, or We Still Demand, which we are continuing to do today – is that “we” never gets really defined. But what we’re really saying, what it gets coded is the white, middle-class, cis-gendered, gay and lesbian people who could enact or perform respectability in the face of legal, state rights, and judicial rights. That’s the “we”. And that’s not different for the “we” in the We Demand or the “we” in the We Still Demand. And I think that this [panel] event that your organization, the Anti-69 Network and some of us historians are trying to create is really the interrogation of that “we” and why it is so problematic?

I think we need to start to move away from, “Stonewall was the beginning of this and We Demand was the beginning of that.” I think as soon as we stop doing that kind of mythology making, we might actually get to reveal and uncover the history of all of these rich stories and experiences that were part of the making of so many communities that have helped us establish ourselves in our country. That’s from my heart.

It’s the “we” that we have to interrogate. 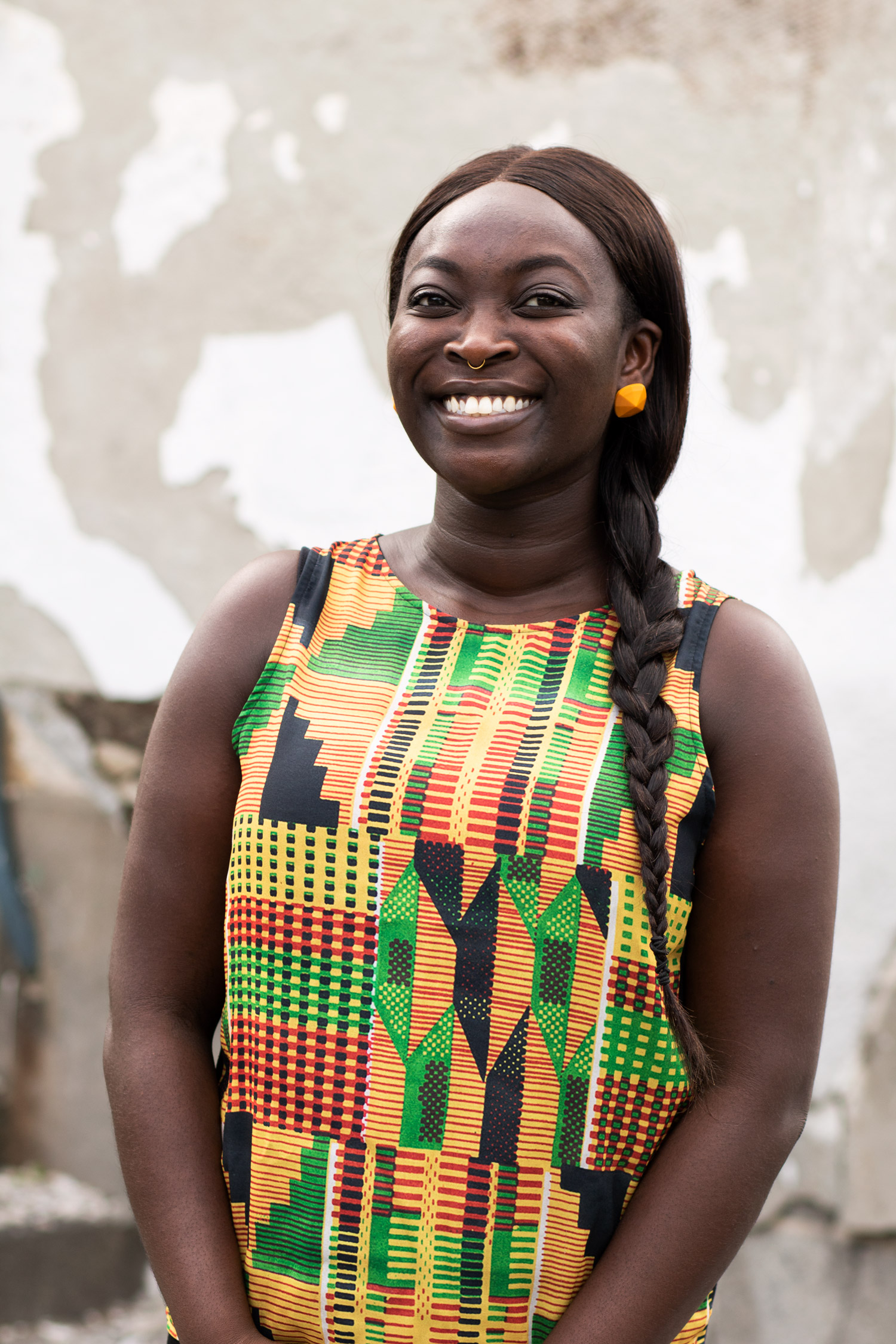 Let’s chat! Send me an email to let me know your thoughts at debbie@ccgsd-ccdgs.org or find me on Twitter @d_owusuakyeeah

Part 2 of the blog series will be out in early September. Stay tuned to read about what Pat has to say about the demands 2SLGBTQ+ people have and how it all ties to current advocacy in the context of the 2021 federal election.

Don’t forget to register for our learning event with the support of the Anti-69 Network and activist-scholars Patrizia Gentile, Tom Hooper, and Gary Kinsman – We Still Demand: The Past, Present, and Future of 2SLGBTQIA+ Activism.

If you’d like to learn more about what we still demand, check out our LGBTQ+ Action Plan Report and the 5 key areas that we’ve highlighted!