Rupert Raj (66) has been a Eurasian-Canadian, pansexual, trans activist since 1971, founding six support groups/service organizations for transsexuals and crossdressers. As a former psychotherapist/gender consultant from 2000 to 2015, he counselled queer, transgender, genderqueer, intersex and Two-Spirit people.

In 2013, he was inducted into The ArQuives (formerly the Canadian Lesbian & Gay Archives), where “the Rupert Raj Fonds” are housed. His three books include “Trans Activism in Canada: A Reader” (co-edited with Dan Irving, Canadian Scholars’ Press, 2014), “Of Souls & Roles, Of Sex & Gender: A Treasury of Transsexual, Transgenderist & Transvestic Verse from 1967 to 1991” (unpublished, 2017, revised 2018; available online through the Transgender Archives and the Digital Transgender Archive), and “Dancing the Dialectic: True Tales of a Transgender Trailblazer (1st edition) (self-published, 2017). The second of Rupert’s memoir will be released through TransGender Publishing in April 2020. 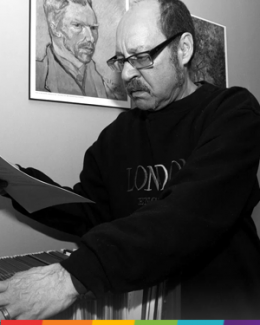 The following is a collection of educational files compiled or written by Rupert Raj, covering a range of topics such navigating healthcare as a person of trans experience, as well as resources for certain subgroups of the community.  This collection was donated by Rupert Raj in 2016, and following his retirement in May 2015, is maintained by the CCGSD.

[Note: Each web link accesses only the book anthology, not the specific book chapter.]